Be it kids or adults – everyone enjoys a good old candy bar. Wonder when it all started and who was the mastermind behind this widely loved snack?

Here’s some interesting trivia on your favorite candy bars, as well as the 20 most popular Candy Bars that will take you down memory lane.

What is a Candy Bar?

A candy bar is a bar-shaped confectionery. Some of the ingredients it comprises of are chocolate, nuts, caramel and dates, among others. This sweet treat comes in several varieties and is unanimously loved by people of all ages and backgrounds. They are considered to be high-calorie foods but are great to satisfy the sweet tooth.

What is the difference between a CandyBar and a Chocolate Bar?

Sugar is the primary ingredient in candy bars whereas cocoa forms the main component in chocolate bars. While candy bars can also include chocolate, they contain a higher ingredient of sugar and water or milk. Chocolate bars on the other hand contain milk, nuts, raisins and other ingredients in addition to cocoa.

Candy Bars are fascinating subjects. People don’t just want to tell you their favourites; they want to know the most popular candy bars in the world, or by each state in the US. We’ve got such interesting stories to tell about candy bars, their origin, and common trivia night and pub quiz questions about candybars here for you:

What was the first Candy bar?

Did you know that chocolate used to be drunk? For most of history, chocolate had been a drink; drunk bitter and spicy in the Americas, then sweetened with sugar in Europe.

In 1847, Joseph Fry pressed a paste of cocoa powder and sugar into a block. In an early example of product innovation and unexpected utility, people enjoyed the convenience and portability of a chocolate bar, and Fry’s chocolate cream is still available today.

What Candy Bar was named after its inventor’s family horse?

Snickers was named after the founders’ (Frank and Ethel) favorite horse who died a month or two before the product was launched. It was introduced in 1930 and was sold for 20 cents at that time. It was originally called Marathon bar but was later changed to Snickers to maintain consistency, worldwide.

What Candy Bar as originally introduced as Rowntree’s Chocolate Crisp?

It’s none other than the chocolate-covered wafer we all love – Kit Kat. It was named after the confectioner, Joseph Rowntree and introduced as Rowntree’s Chocolate Crisp in 1935. It was only after World War II when it started getting marketed as we know it today, KitKat.

Which Candy Bar used Bart Simpson as a spokes-character in their TV ads?

The 3 Musketeers candy bar came in three individual pieces of chocolate, vanilla and strawberry bars. They stopped producing vanilla and strawberry when production became expensive after World War II. However, they continue to introduce limited-edition flavors such as mocha cappuccino, cherry and French vanilla.

Which was the world’s first combination Candy Bar?

At a time when people were only making all-chocolate or sugar-laden candy bars, Nashivlle’s Howell Campbell made a candy bar with multiple ingredients such as peanuts, marshmallow, caramel and milk chocolate. This candy came to be known as GooGoo cluster. Not only was it made up of more than one ingredient, it also came in a rounded shape – setting it apart from its competitors.

What is the healthiest Candy Bar?

Insider argues that since KitKat is predominantly light wafer, it contains the fewest calories; but HuffPo suggests Snickers for the lowest saturated fat content. We think the healthiest CandyBar is the one you share.

When was the Twix Candy Bar first manufactured?

Twix candybar was first invented by Forrest Mars Sr., the owner of Mars Limited. It was manufactured in 1967 at the company’s Slough factory in Britain and was officially launched in the United States in 1979.

The 20 Most Popular Candy Bars (that will take you down memory lane!)

It’s interesting to note how so many of our favorite candy bars have been around for decades and even today, enjoy massive popularity across the globe. Here’s a list of the 20 most popular candy bars of all times – 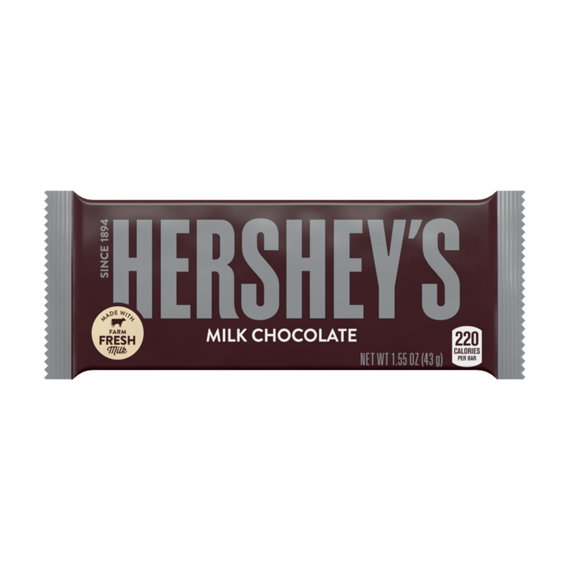 Manufactured by one of the largest chocolate manufacturers in the world, The Hershey Company, Hershey’s Chocolate Bar is widely popular across countries and the company’s flagship product. Made with ‘farm fresh milk’, Hershey’s bar is soft and smooth to eat. Fun fact – it is also known as the ‘The Great American Chocolate Bar’. Milky Way candy was the first filled candybar. A delicious mix of chocolate, nougat and caramel, Milky Way candy is distributed by Mars Inc. and named after a popular malted milk. “Have a break, Have a KitKat” – if this chocolate candy bar was not iconic enough, its strapline sure is. Considered to be the first confectionary brand sourced from 100% sustainable cocoa, KitKat is a chocolate-covered wafer that can be snapped in half and eaten.

Alright – not something you can eat, but something to chew on. We named our blog and app CandyBar for several reasons; because we think it’s sweeter when shared with a friend, because we want you to come back for more like a loyal customer,, and because we want our CandyBar make our customers smile – like a real candy bar. Launched by The Hershey Company, Take5 candy comprises of five layers – pretzels, caramel, peanut butter, peanuts and milk chocolate, giving it the best of sweet and salty. It was relaunched in 2016 to cater to the evolving tastes of the new generation. Not too fond of chocolate? Here’s something you can relish – PayDay candy bar. Made of salted peanuts and caramel, this candy is both sweet and salty. What’s more if you are on a gluten-free diet, you can treat yourself to a PayDay candy bar without any worry.

Who remembers the iconic Marathon candy bar? Manufactured by Mars Inc., this was an 8-inch braided caramel layered in milk chocolate. Unfortunately, eight years after the launch, Marathon candy bar was discontinued in 1981 and is till today fondly remembered by many. Chocolate, caramel and crisped rice – all of these make up the iconic 100 Grand candy bar. Nestle claims that the bar contains 201 calories and is low in cholesterol and sodium. 100 Grand candy turned 50 in 2016 and is considered to be a “luxurious” chocolate bar. A popular Canadian candy, Coffee Crisp boasts of crispy wafer, coffee-flavored candy and chocolate. It is loved because it is a light, yet tasty snack. This classic Canadian candy recently celebrated its 75th anniversary and continues to treat fans to new, limited-edition flavors. The first combination and round-shaped candy, GooGoo Cluster contains peanuts, marshmallow and caramel, dipped in milk chocolate. Known to be chewy, crispy and delicious, it promises to take you down memory lane.

Another non-chocolate candy bar, Big Hunk is produced by the Annabelle Candy Company. It is a bar of honey-sweetened nougat and whole roasted peanuts. It is low on fat and is among the healthier candy bars. Butterfinger is the perfect marriage of crispy peanuts and milk chocolate. While this candybar has been around since 1923, in February 2019, the brand announced an “improved recipe” which happens to be a healthier take on the original.

Characterized by fun colors, M&Ms is a universal snack favorite. They come in different colors and flavors such as almond, peanut butter, dark chocolate and more. What people love about this candy is how hard it is on the exterior and smooth on the inside.

Produced by Mars Inc., 3 Musketeers is whipped nougat wrapped in a layer of milk chocolate. It claimed to be the largest chocolate bar when it was launched. If you love coconut, you ought to love Almond Joy candybars. In addition to coconut, it consists of milk chocolate and whole almonds. In case you prefer dark chocolate, you can opt for Mounds candy, also part of the Hershey’s family. Coming in the shape of a cup, this candy consists of peanut cream along with dark, milk or white chocolate. It comes in various sizes and the company also releases holiday-themed flavors from time to time. Sold by Nestle, under the Willy Wonka Candy Factory brand, Nerds are colorful, pebble-shaped mini candies. They are crunchy and come in several flavors such as grape, strawberry, watermelon, cherry and orange. Each box has two compartments, with one flavor each. Nerds candy primarily consists of dextrose, sugar and malic acid.

From Halloween and Christmas to birthday parties and other special occasions – we all have fond memories attached to candy bars. Go ahead, share your favorites in the comments section.